January 08, 2015
After one year of mailing and conversation on via Inernet we met in Torun. That was wonderful time. It gave us a lot of new knowledge not only about Stalag. Every single trip makes an new relationship, how worthy it it!

My name is Sandra Butterfield and this story is about a trip I took to Torun, Poland with my father-in-law Ray Butterfield and my husband Mark. The trip was as a result of Ray’s love for his father Fredrick Butterfield, and the passion and dedication he had developed towards the 2/5Australian General Hospital in which Fred served.

I never met Fred Butterfield, when I met my husband (Mark) Fred had passed away. But he still lived on in Mark’s memories. In the early days of our marriage on Anzac Day, Mark would go and retrieve a blue ice cream container which was full of military buttons and badges that his Pop (Fred) had brought back from the war and gave to him when he was young. Mark would place this container on the kitchen table and proceed to toast his Pop with a beer. The buttons and badges are now framed and hang on the wall. It was when, some years later that our daughter, Emma who was in grade 2,andleaning about the war,that she started to ask a lot of questions about her Great Grand Father Fredrick, and from those questionsRay’s interest was sparked. Thirteen years later Mark and I are taking Ray over to Torun, Poland to walk through Fort XV where his father was a POW for 2.5 years.

As I said, I didn’t know Fred Butterfield so I did not have an emotional connection to the man. I was going on this trip because we felt it was something that Ray needed to do, so together we arranged for Ray at the age of 81, (sorry Dad for telling everyone your age) and with the help of a fantastic guide Pawel Bukowski,inSeptember 2014 we hopped on a plane and flew to Torun.

On the first day we met our guide Pawel, heshowedus an excellent presentation on the history of the town includingthe Forts which during the war were used as storage areas for the Germans andas POW camps. Pawel’s knowledge and dedication to telling the story of the Australian POW’s was amazing. After the presentation it was time to go to Fort XV. I sensed Ray was starting to get emotional, nervous and a feeling of not believing he was going to go to Fort XV,this was apparent when we pulled up at the front gate of the Fort. 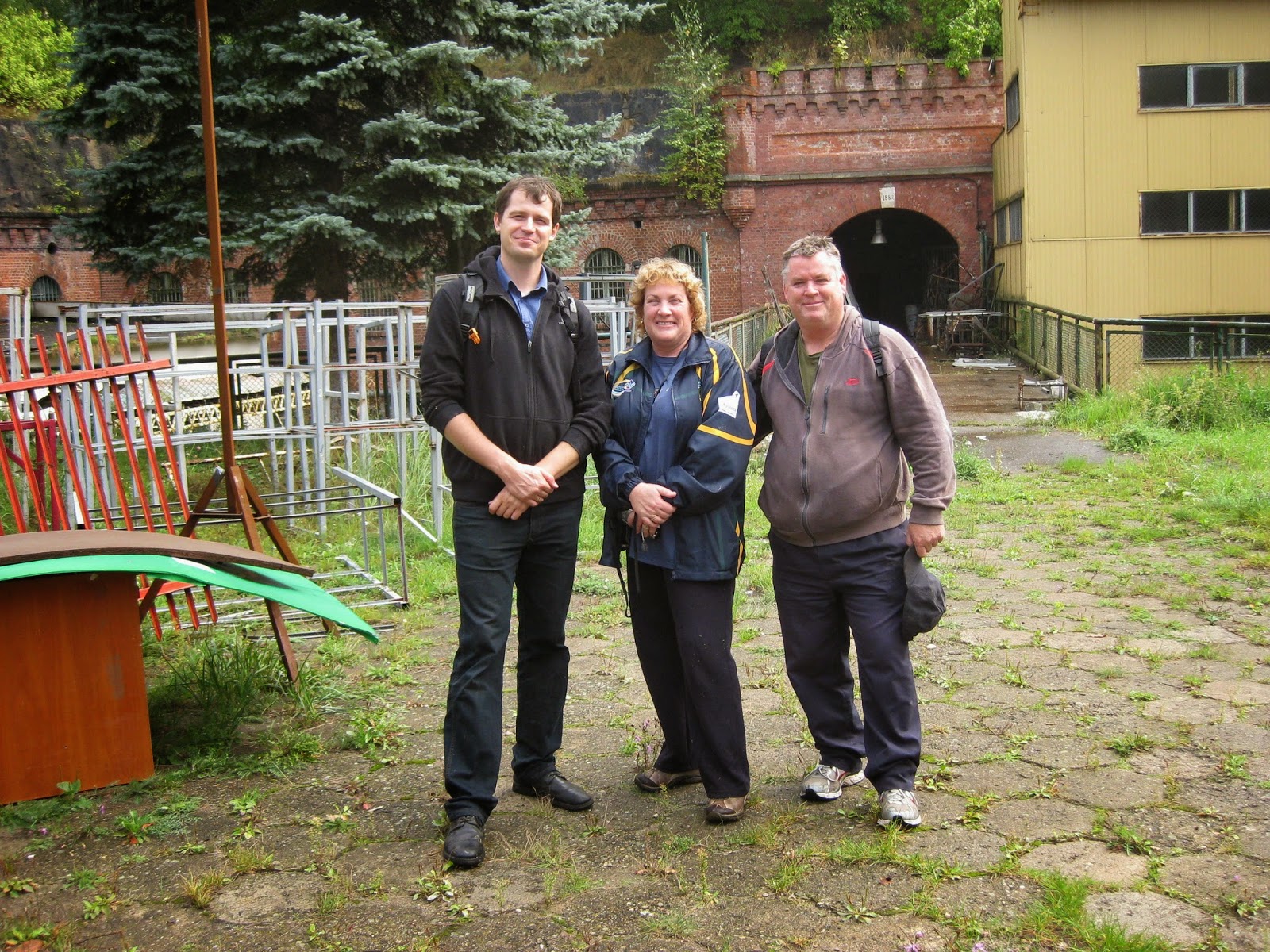 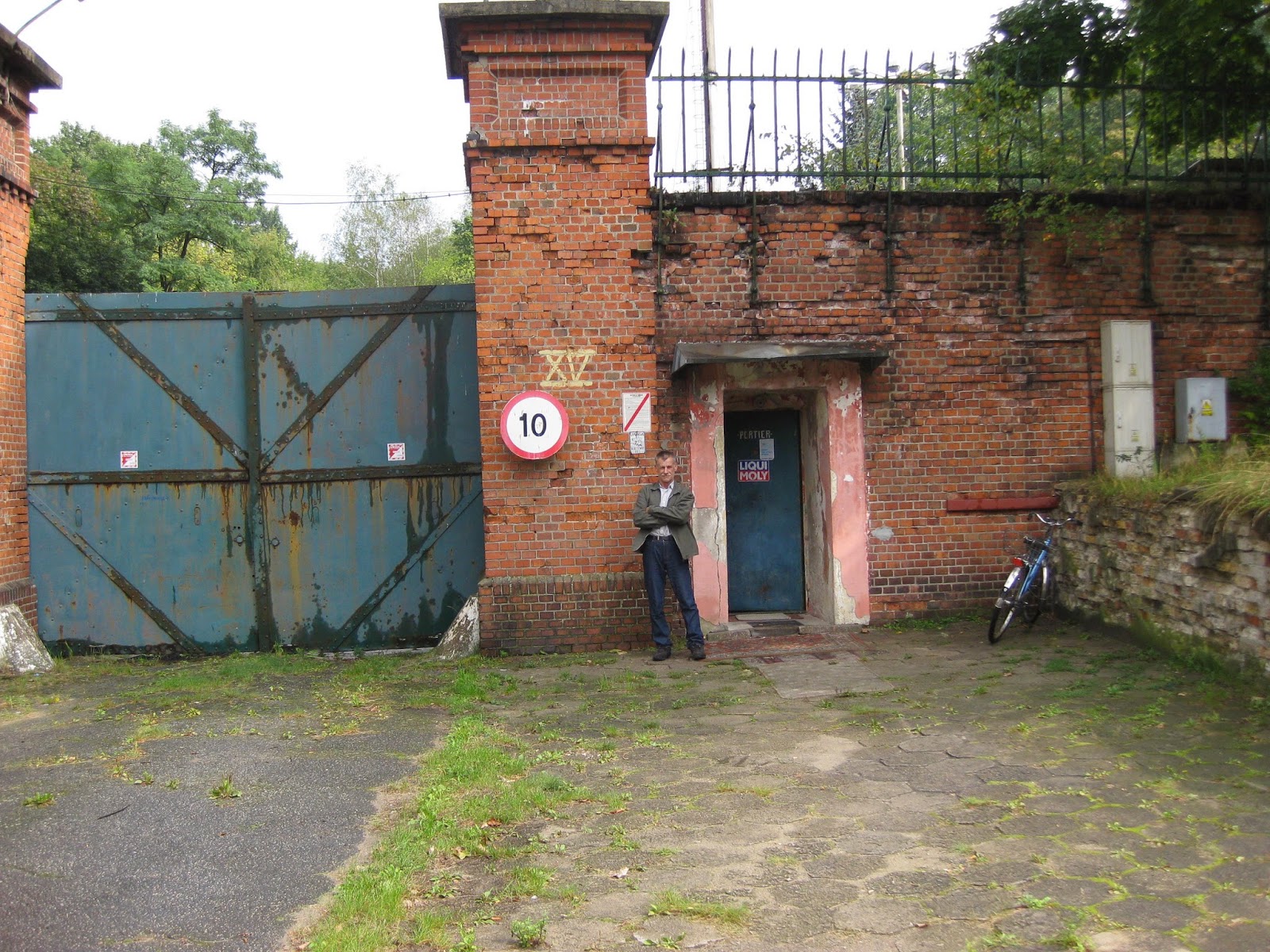 Fort XV is not a camp consisting of a series of building above ground, it is a 2 storey bunker style built into a hill with a moat surrounding the complex. There was one way in and one way out….

The front housed the POW’s accommodation so each room had two windows,but mostly the rest of the buildings wereunderground.

Over the past year or so Ray and Pawel have been corresponding.This is due to Ray’s position as Secretary of the 2/5 AGH Association who funded the Exhibition project.
Ray had sent Pawel some photos which Pop had taken while in the camp. Pawel brought these photos and together all four of us talked, discussed and compared what was in front of us to the photos. Pawel took us into the Fort and armed with the photos we think that Ray at one stage of the tour was standing in the same room his father shared with about 20 odd men for 2.5 years. 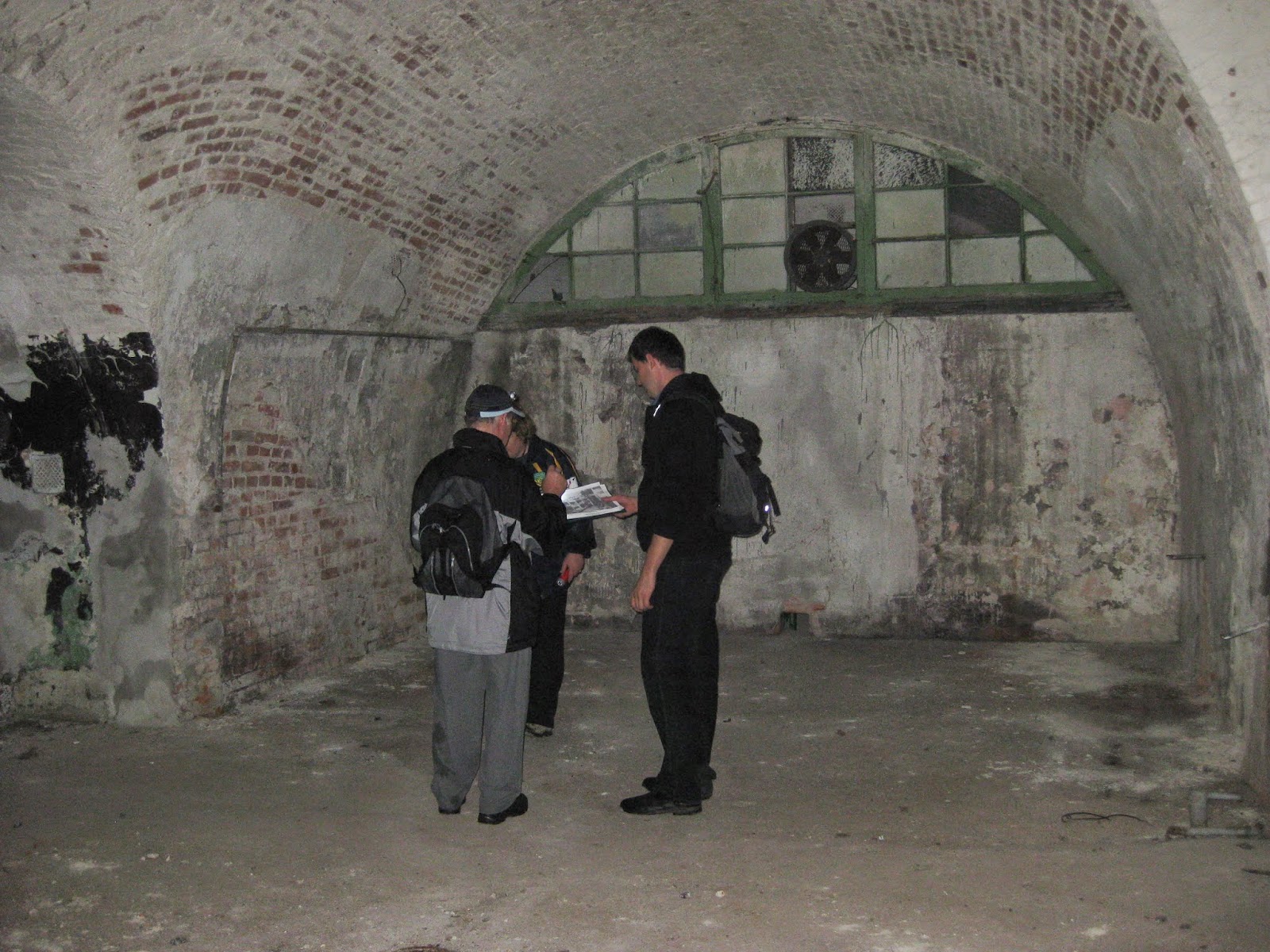 The left photo is the room which we think Pop slept in. The other is my favourite –‘a son reflecting on what is father would have been going through living here’. 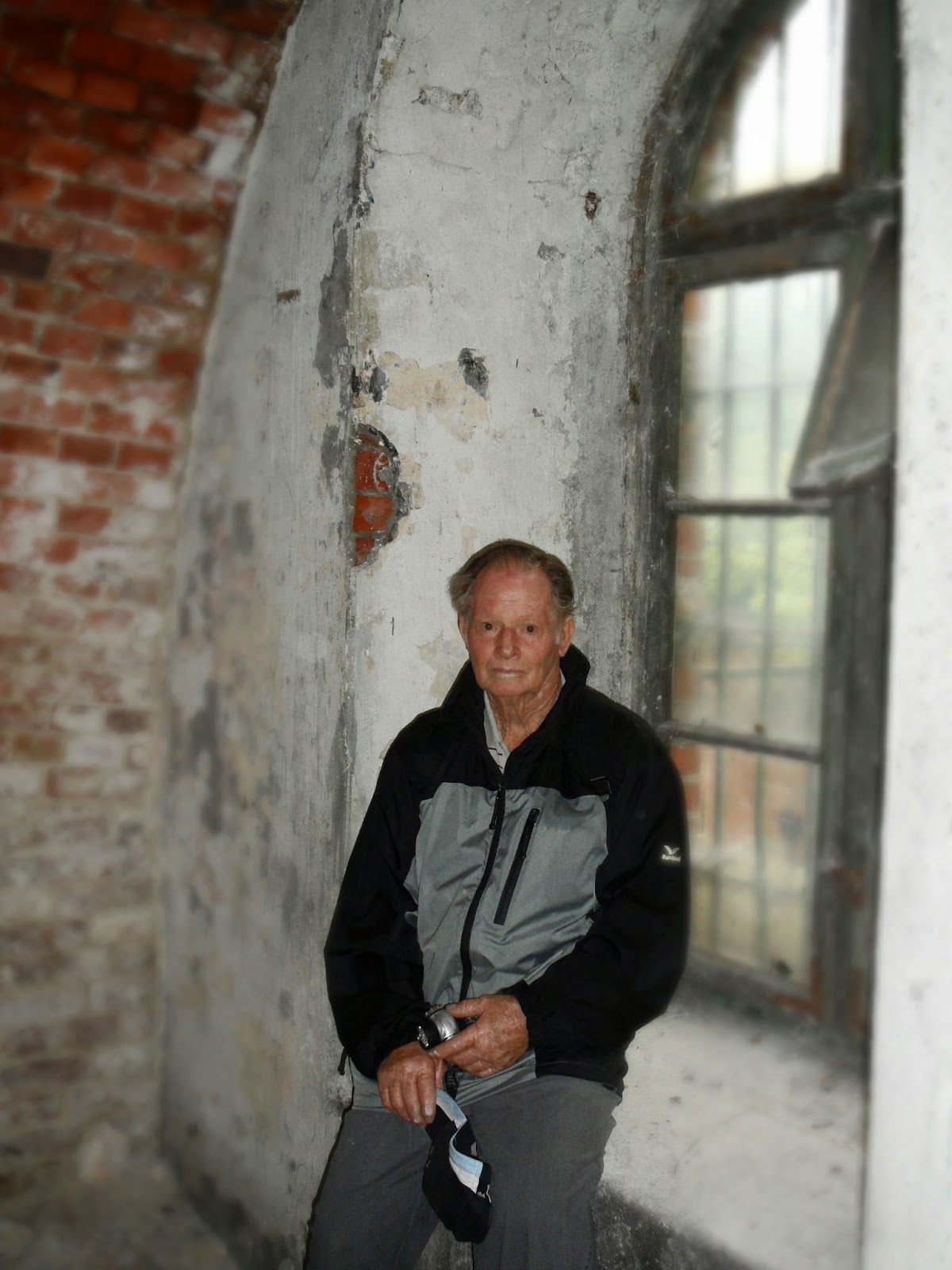 Fort XV over the years has not been looked after. It is dark, smelly and in some areas is it too dangerousto walk around. The parade ground which was once used by POW’s to hold sport days or just to sit on the hill side and breathe in some fresh air and to see some sunlight, is now over grown but standing there you get this feeling come over you of what the men would have seen. We spent several hours walking around the fort imagining what it was like for the POW’s.Pawel’s knowledge of the fort and the research he had conducted on the Australian POW’s is a story that needs to be told. I started to get this overwhelming feeling of admiration for the POW’s who lived there, and that one of them was SGT Fredrick Butterfield who I said at the beginning of my story, I had no an emotional connection with, but that all changed.

The next place to visit was the Polish Historical-War Museum. The curator and co-founder of the museum Piotr Olecki was excited to meet Ray as he was responsible for the donation ofmany of the items on display for the Australian Exhibition.Some of the items donated were photos Pop has taken while in the camp and an Australian flag. This again this was a very emotional time for Ray, especially when a young school student spoke to him about the photos on the wall. 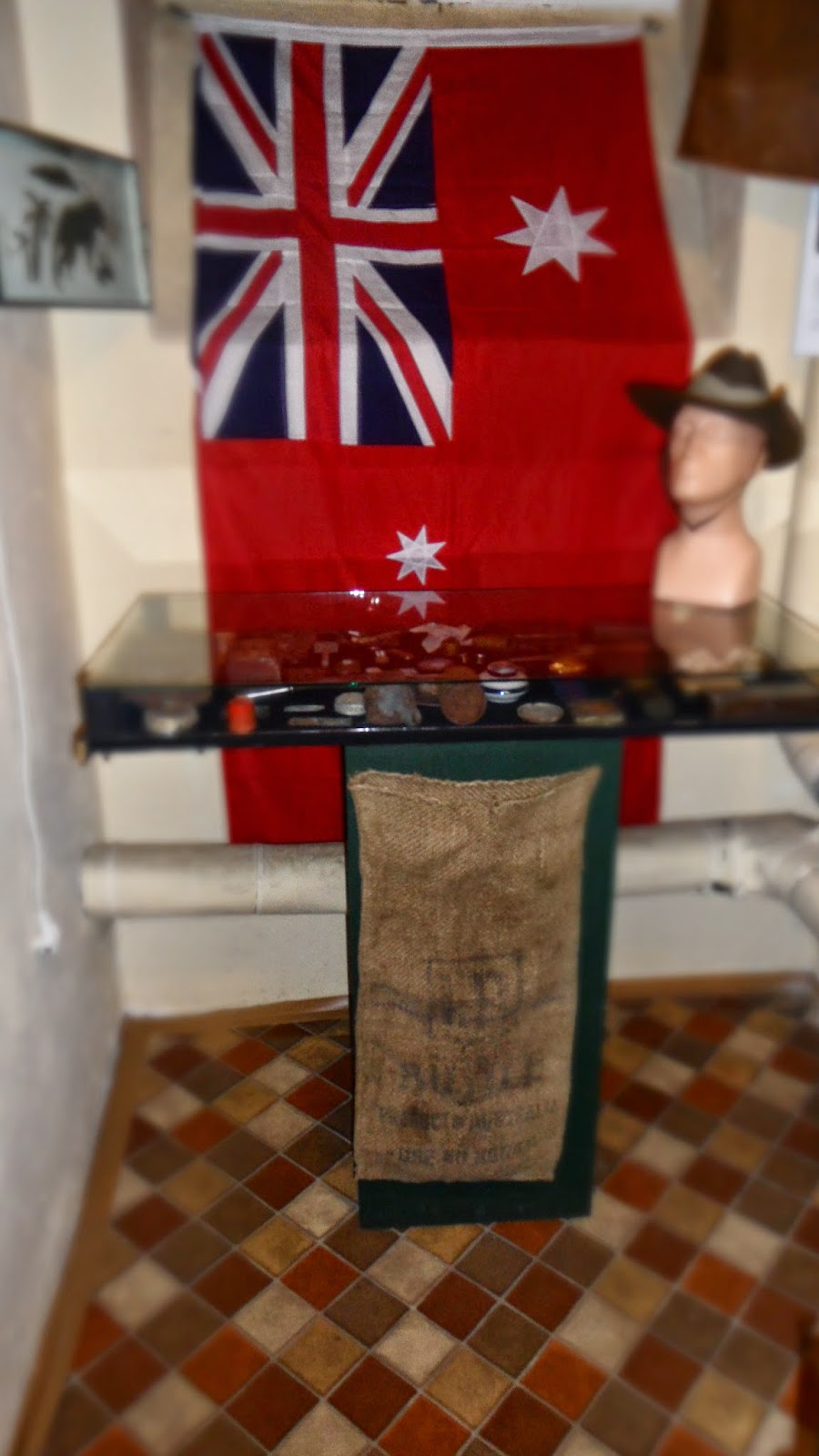 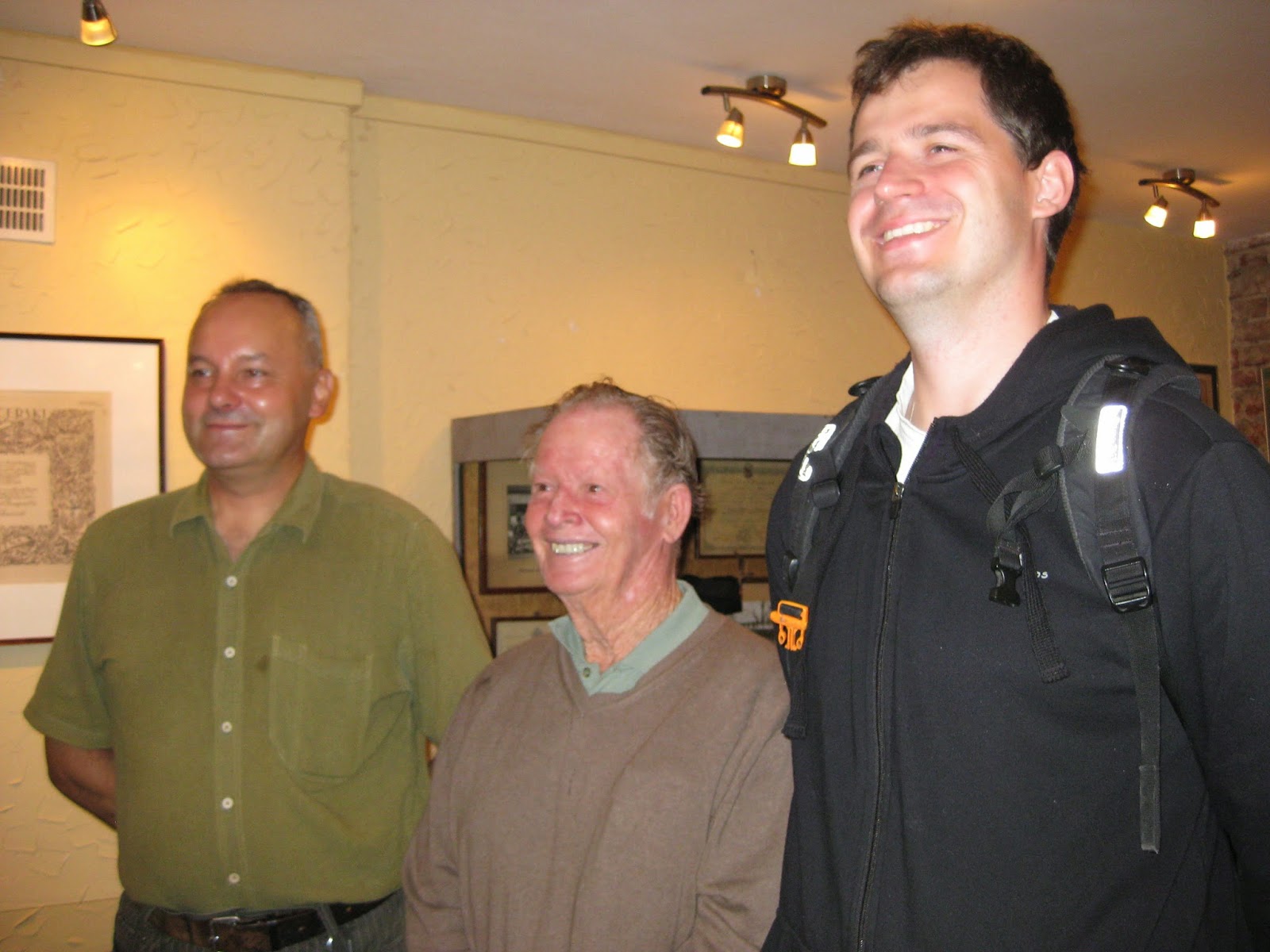 The other two days at Torun were filled with Pawel and Hanna (his wife) showing us their beautiful city. We not only enjoyed the slights but we also enjoyed coffee, cakes and a traditional Polish dinner at a fabulous restaurant. I would highly recommend anyone going to Torun, it is like a hidden gem, and if you are interested in following in the footsteps of your father/grandfather who was a POW in Torun then you must contact Pawel as his tours are excellent, but not only that he and his wife are lovely people.

As for my husband Mark, his thoughts on the trip; he said, the trip was an emotional one because I was standing in places that Pop had been. I was very proud of my grandfather, and that I was able to take my father to the Fort and enjoy the experience with him.

And as for my father-in-law RAY’s thoughts, this is what he wrote; In September 2014,my son Mark and his wife Sandra, conspired with Pawel and his wife Hanna to take me to Poland to visit the Forts where the Australian POWs were incarcerated.

The highlight of the trip was when Pawel walked with us on the bridge over the moat and through the heavy steel doors into the tunnels that housed my father and his mates for such a long period of time.And then to actually sit on the window sill of the window that my father probably peered out of for all those years. I then proved “That Grown Men Do Cry”.

This was truly a wonderful experience and I whole heartedly thank and commend Pawel, Hanna, Piotr  for keeping alive the spirit of our Veteran Families. 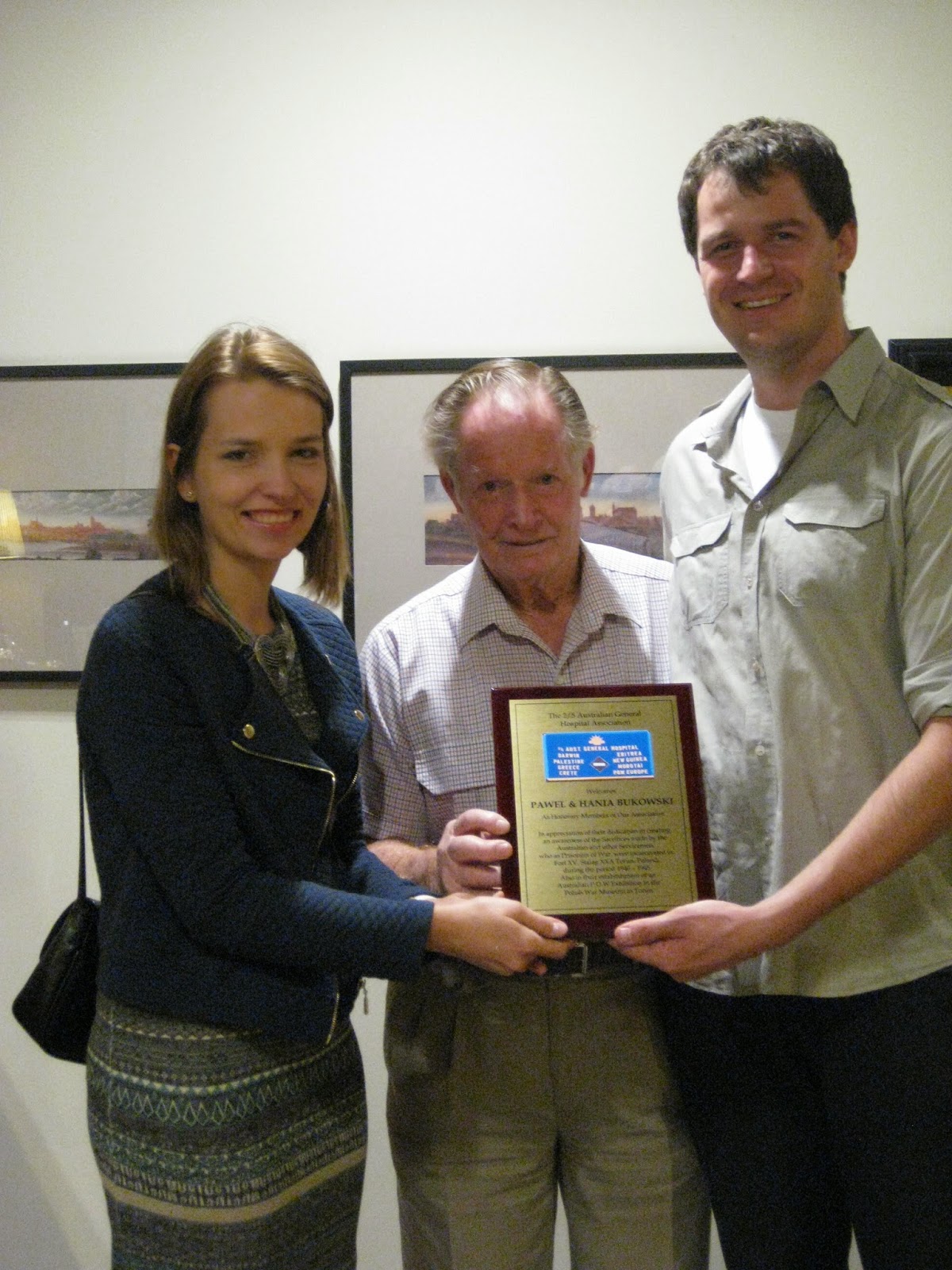 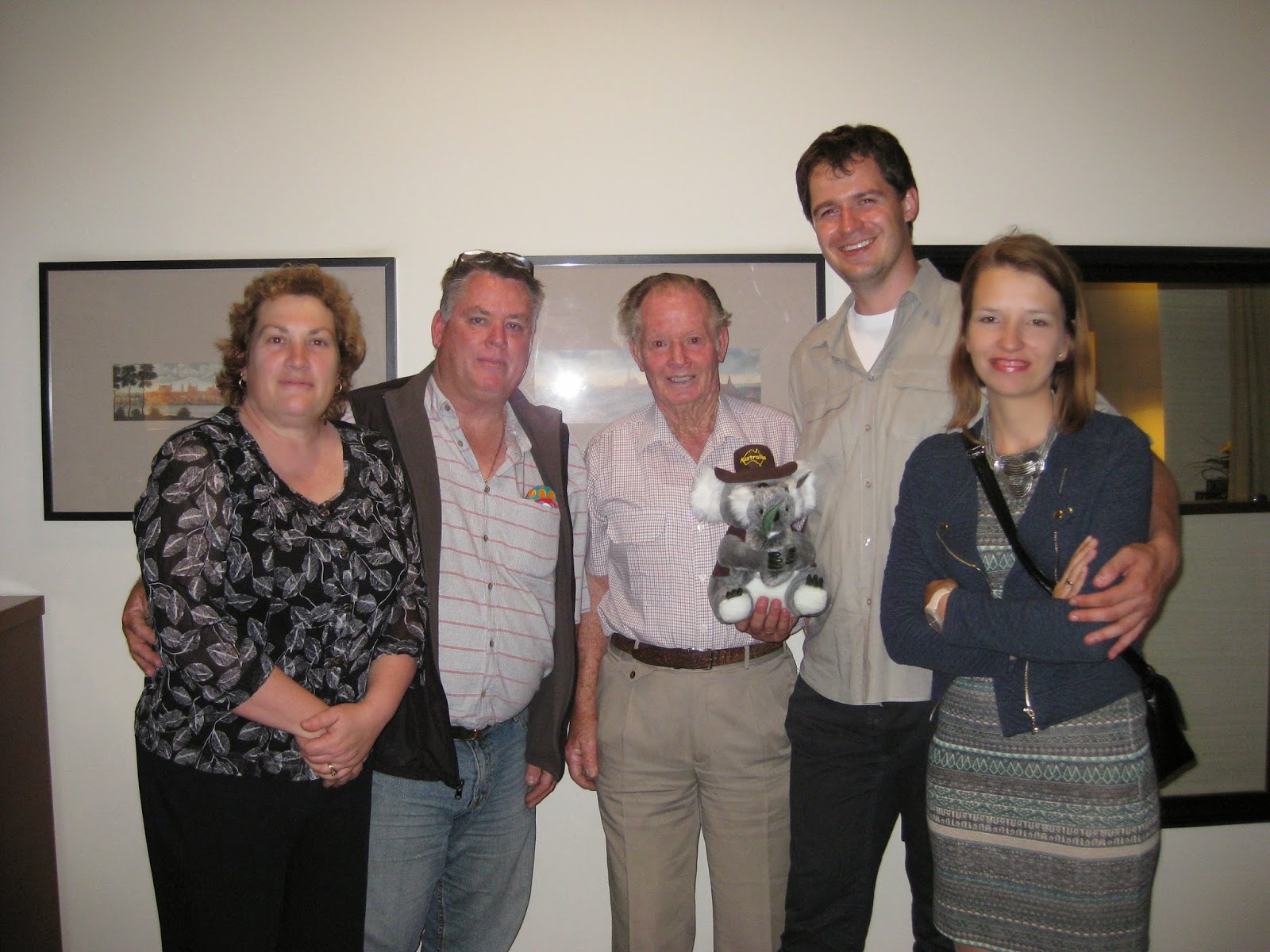 Popular posts from this blog

May 06, 2011
Monthly bath in Stalag XXA Living conditions Lawrence Travers Dorins a former POW describes „fort XI was surrounded by a high bank and the fence around it with gates across the entrance road, on one side there was also a dry moat with a bridge on it. The bridge led to a tunnel” The fortress was covered with trees, bushes and earth so that the fortress could not be visible from the bird's eye. Prisoners slept in caponiers where initially were supposed to sleep Prussian soldiers. Yet PoW describes the rooms as if there were designed as rooms in the concentration camps. Rooms looked as semi tunnels. “The perpendicular walls were about 3m high and the height of the arched roof was about 5 m, wooden bunks provided sleeping spaces. Each room had only two small windows which obviously allowed no ventilation. Due to the end of the night the air was solid and everyone would have a headache due to oxygen starvation” .In those rooms kept approximately 32 men. There were three shelves whe
2 comments
Read more

August 08, 2019
That was very interesting beginning of August. Since first messages from Jason, we knew that it will  not be a random trip. His grandfather was a prisoner of war who spent in Stalag 20A all war. During his imprisonment he sent a lot of letters and postcards which almost all survive! Thanks to that, it was very easy to see and knew more about places where he was. What is more, it was an excellent source to see how Germans organised system of support for local farmers and industry. Finally we heard a lot of interesting stories about Russian prisoners of war who helped western soldiers during The Long Marches To Freedom.
Post a Comment
Read more

May 17, 2015
That was wonderful trip. During three days we saw couple of places connected with POW path of Jack Stansfield. Moreover thanks his son Michael we saw notes with memories of last days in Stalag XXA in Torun. In opposit to all facts which says that prisoners left camp in late december 1945 Jack wrote that they started to march on 21 january! That means that lasts groups of POW left camp in 10 days before Torun was liberated. Fortunatley Jack survived afeter he escaped from march. He met russians army and polish partizants. Below we presents you short memories about Jack and trip to Poland... My father was called Jack Stansfield, he was born in August 1918. He was brought up in the market town of Malton in North Yorkshire where his parents were publicans. He joined the Territorial Army in March 1939 and was mobilised on the declaration of war. Jack enlisted in his local regiment joining the 5th Battalion of the Green Howards. After a short time at the Regimental HQ in Richmond, North
Post a Comment
Read more

wartimeguides
Hania and Pawel (Torun, Poland). We are English speaking tourist guides who are really interested in history of Torun during the WW II. In this blog we would like to present some facts about Stalag XXA. Apart from that we offer you help in organizing trips to Poland or Torun. Tailor made tours include: Assistance during trip to Poland, sightseeing Torun, XIX century fortifications a part of Stalag XXA, help in searching and organizing meeting with witnesses of those time. All pictures are protected by copyrights. If you are interested please contact us. wartimeguides@gmail.com